Harmless diversion or pure evil? That depends. Religious leaders and community figures worldwide are speaking out about this scourge that is so afflicting the unwary computer users of this age, a social problem worse than reality TV, more pernicious than the latest potty mouth rapper, worse even than leaking breast implants. It's name? No not freebase-- Freecell!

The Addiction: How It Starts

At first Freecell appears to be just another solitaire game, a time waster, something to do during coffee breaks. But sadly for many it eventually becomes something more. Something dangerous. Something life-controlling. Something so addictive that men have been heard to say "No, I don't feel like it right now," and Freecell-distracted mothers have been witnessed to utter, "Tell baby Jimmy to change his own d**n diaper." Clearly, somewhere touch is lost with reality.

Beginning first with a few games per day, the unsuspecting Freecell participant, called a "player", suddenly begins to experience a curious, almost erotic thrill in winning several games in a row. There is even a name for this: in Freecell circles several sequential wins are called a "streak". As the addiction progresses, a player who is "streaking" will become so obsessed with adding one more "win" to their streak that they are much like the crackhead waiting for their next "hit". The player will often sit at the computer for hours, intensely focused on the game, at the expense of all else in their lives. They may go for days without eating. They may develop tremendous bladder capacities, afraid to get up from the computer lest another family member get on. They may miss work, or worse, they may begin "playing" at work. In fact, statistics on this social enigma suggest that the bulk of all Freecell games are actually played while the users are at work!

An addicted Freecell player may frequently be unaware of their own increasing addiction. Thus, family members, friends, and coworkers should familiarize themselves with the signs of impending addiction.

At home, watch for a growing messiness in the area of the computer. Cleanliness and personal hygiene are often the first things out the door as the obsession begins to take hold. Also, keep an eye out for the "paraphernalia" of the addiction, such as Freecell-related books as shown at right.

The Stages of the Addiction 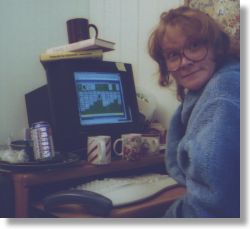 As the addiction progresses, you may notice very dramatic mood swings. When the addict is on a big "streak", they may seem cheery, fleetingly affectionate, even personable (see photo at right). However, immediately after the loss of a big "streak", the addict is plunged into a deep abyss, a profound depression may ensue, and they may exhibit behaviors ranging from an immediate frantic and compulsive drive to get back on a streak, or they may attempt to damage computer equipment, or take out frustrations on kitty or Spot. Beware the hostile post-streak depraved Freecell addict-- they may be dangerous and unpredictable.

Twelve Steps: Taking Back Your Life

Here at Freecell.net, we feel it is our responsibility to inform as well as to entertain. If you feel like you have begun to fall prey to the addictive components of this beguiling game, please refer to the simple steps outlined below. By following these guidelines, many people have managed to return to society as fully functional individuals, in some cases even able to play the occasional "social" Freecell game without reentering the downward spiral. And remember, at Freecell.net we're not like some big tobacco company-- we're here to inform and to help.

So with no further ado, here are the time honored Twelve Steps that recovering Freecell addicts everywhere have successfully used to rejoin normal society:

A Note from the Management

But seriously folks, it is a pretty addictive little game. Break outta that computer trance every once in a while and go outside, call a friend, pick up the dishes around your computer, talk to your kid, or if things get really desperate, do some work at your job. Whatever it takes. It's OK to streak, but let's streak responsibly, eh?

All content copyright ©2022 Freecell.net
By using our games you consent to our minimal use of cookies to maintain basic state.
Maintained by Dennis Cronin