When viewing any scores page, you can hit Refresh/Reload in your browser to fetch the latest results. See below for an explanation of the different types of scores.

About Scores and Stats

The table heading is shown in parenthesis to the right of each section. Scores and Stats have been broken into separate tables as there was just getting to be too much detail to show in one table.

This tally shows the current high rollers in the standard streak department. A streak of course is how many games you've won in a row without blowing one. We have logic to age out folks who've found themselves in a losing game but just don't have the gumption to quit out of it. Note: ties on the streaks lists are decided in a very arbitrary manner: I needed something concrete and I've just used the account creation time with newer accounts winning the tie. Someday I'll do something better.

All Time Streaks (All Time)

These streaks may no longer be active, but they are the best the particular players have achieved in their auspicious NetCELL careers. Some of these are very old.

This category tracks how many games in a row a person has won in one 24 hour day EST. If you win 35 games in a row on a particular day, but blow it below day's end, you're still on the board for the 35. Of course if you're obsessive (no one here like that), you could run up a second much better streak, and that would then take precedence.

The best one day streaks of all time. Like the All Time Streaks above some of these are pretty dated. We've been doing this a while.

This is the games in a row the person has won just in the current calendar year. Say they carried over a streak of 50 from last year and have won 40 more games in a row. Their Current Streak and All Time Streak will show the full 90 but since they're only won 40 in the current year the Yearly will show 40. Since we've got over 20+ years of data now it's hard to get onto the All Time list but you can still strive to "win the year."

Simply the total number of times this person has played this variant, streak or non-streak.

The number of total wins, streak or non-streak, for this variant.

The percentage of wins divided by plays and sorted with that weird rule that makes higher numbers of plays count more: This way someone who has only played 2 games and won them both doesn't come out ahead of someone who has played 2788 games and only lost one. There ain't no perfect solution here, hence this compromise.

A rough average of playing time in this variant, simply total time divided by plays.

Vaguely accurate "average streak length" but it's just plays divided by losses. It's not really a good indicator as it's not streak-specific.

How long since they've played this variant.

Total time they've spent actually in a game on this variant.

The "You Win" Dialog

When you win a game you get a "You Win" dialog box with a fair amount of information something like this: 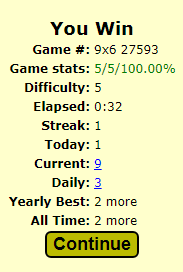 The game variant {columns}x{cells}, for instance 9x5 or 8x4, and then a number which uniquely identifies the deal.

This shows the global stats for that specific game: plays/wins/percentage.

How long you took to play the game. Note that if you go idle without explicitly saving the game this time will include the idle timeout.

Your current streak (number of games won in a row) for this variant. This number is less meaningful for the harder variants where you might have a much lower overall chance of winning.

This is your ranking in the Current Streaks list. "Current" is defined as "has played within the last two weeks." We set that arbitrary limit so as to not show all the streaks where people have gotten stuck but not wanted to quit out.

If your current streak is greater than or equal to your best of the day this gives your ranking on the Daily Streak list with the heading "Daily". If you're below your current daily best (see Today above) it shows how many games you need to win to catch up to your previous effort and the heading says "Daily Best".

Like the daily streak above, this looks at your record for the year. If you're forging ahead it shows your rank for the year with the heading "Yearly". Otherwise it shows how many games you need to win to catch up to your previous yearly record and the heading is "Yearly Best".

Also like the daily and yearly, this tracks your all time streak. Unlike the above the heading does not change but the data displayed is differently. If you've matched or exceeded your previous all time streak if will show your ranking against all the other players. Otherwise it shows how many games you need to win to match your previous record.

Who
Who's playing right now

All content copyright ©2022 Freecell.net
By using our games you consent to our minimal use of cookies to maintain basic state.
Maintained by Dennis Cronin